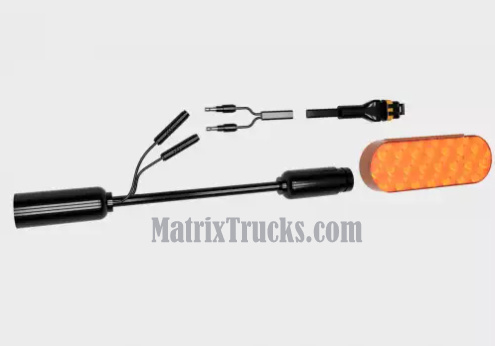 The Federal Motor Carrier Safety Administration granted a waiver to the National Tank Truck Carriers to allow fleets to install a red or amber brake-activated pulsating light (lamp in the upper center position or in an upper dual outboard position on the back of tanker trailers. In addition to the steady-burning brake lamps required by the Federal Motor Carrier Safety Regulations.

Groendyke Transport, of Enid OK, recently was granted a limited five-year exemption to allow use of an amber brake-activated pulsating lamp on its trailers in addition to the steady-burning brake lamps required by the Federal Motor Carrier Safety Regulations (FMCSR).

FMCSA granted a similar exemption to tanker fleet Groendyke Transport in April 2019. It allows carriers to install an amber brake-activated pulsating light in the upper center on the back of tanker trailers in addition to the steady-burning brake lights. Groendyke said over a 30-month period, using the lights reduced rear-end collisions by nearly 34% and eliminated all rear crashes at railroad crossings.

“This exemption is a simple, common-sense way to reduce accidents in our industry,” said NTTC in a statement. “When Groendyke installed these lights on their trailers and petitioned FMCSA, all rear-end collisions dropped by 33.7%.”

In its petition, NTTC cited several studies conducted by the National Highway Traffic Safety Administration (NHTSA), another agency in the U.S. Department of Transportation, on the problems of rear-end crashes, distracted driving, and braking signals.

“Research indicates that there are ways to improve the attention-getting qualities of braking systems,” NTTC stated. “Including a pulsating brake lamp on a lead vehicle has quantifiable effect on the drivers of following vehicles and measurably reduces rear-end collisions. Drivers are redirected and altered faster and more efficiently when a pulsating brake lamp draws their attention to the lead vehicle. As a result, rear-end collisions can be prevented or at least reduced.”

§393.25e says that exterior lamps need to be steady burning when in use, with exceptions including:

This regulation exemption is an addition, rather than a subtraction, which is to say tanker trucks will still need to have the commonly-known steady-burning red brake lights at the rear end in addition to pulsating amber brake lights.

The exemption is effective as of October 8th, 2020, and will last five years until October 8th, 2025. When that time comes, the FMCSA will consider whether to expand the exemption further. Giving more time and perhaps applying it to more types of commercial vehicles, or may scrap the entire prospect if the results do not match what Groendyke Transport and the NHTSA found in their studies.

The way things look now, though, this change seems to be for the better. It appears an easy way for tanker trucking companies to reduce collisions by a little over 33%, and if the contents of the tanker prove to be volatile, the lower the risk of catastrophe, the better.

Best service all around! Been working with Anetta for 5 years now and always receive top notch service, always goes the extra mile!

“Matrix has proven to be a very dependable trucking company.  This is highlighted by their excellent communication and sense of urgency on every shipment.  The dispatchers are trustworthy and are always willing to help us out.  The exceptional service and accountability have created a great partnership!”

“Matrix is the kind of company we like to deal with. They’re not too small or too large, and they’re open to changes to get the job done right. Matrix operates with integrity and they hold us and their fleet accountable; that is the type of partnership we like to see. They’re a carrier built to succeed and it has been a pleasure working with them and watching them grow.“

“Hello, I am Kevin VanWalleghan and I have been driving for over ten years, I have been working with Matrix since August of 2015. I am a contract driver for Mariya Swanson, AVNS Capital.

From the beginning when I was processing in Matrix staff in the office has been very helpful professionally and fun to work with. Over the months with Matrix I rarely make it back to the office so most of the contact I have with everyone there is on the phone or electronically. However making contact and successfully completing the business of the day to day trucking tasks is very easy. The dispatch and load logistics staff has kept me busy without waiting for loads after deliveries. I have had one or two occasions that I have had to wait several hours for a new load but that’s trucking sometimes. Overall I am preplanned and go from one load to the next without any problems. When issues arise they are there and willing to assist and make things work, I have worked with many dispatchers in my time, these folks are top notch and willing to help out the driver.

The support staff in the office is always available and willing to help with any issues that can arise from load paperwork to permits. They are always ahead of schedule giving me advance notice for anything that may be expiring and needing to update. Paperwork is emailed to me so I can print it out at home or at the closest truck stop. Because I haul hazmat materials so often I have come to appreciate the small inconvenience of having to send copies of all paperwork related to the hazmat load being accepted before leaving the dock. I have learned much about the details of that complicated Hazmat paperwork from our Safety coordinator Rosi. Rosi has saved me possible write ups by finding small details that can get a driver written up or put out of service during a DOT inspection.  I always enjoy working the office staff as they are one of my most frequent contacts with Matrix.

The owner of the truck I pilot has had no issues with being paid on time to my knowledge as my pay for my weeks driving has always been on time and in full. Matrix offers inspection incentives for passing DOT inspections. I have had the opportunity to collect on those 3 times over my time with Matrix. The trailer I pull is owned by Matrix and issues with the trailer when they come up are resolved quickly and easily.

Now the important part for us drivers to consider is home time. I have been able to be at home whenever I have requested to be home, within reasonable amounts of time being out on the road. The dispatch staff is great they get me home for weekends at times for a reset or longer if that’s what I request. The office doesn’t call and bother you with silly questions; they really respect your time at home with your family. Something I really appreciate!

Overall the staff at Matrix is excellent in my opinion! They all work to make the task of trucking as easy and efficient as possible. I know the feeling that I get from working with them, even as little as I get to the office, is that of being part of Family. This makes working with Matrix so much more enjoyable for me as a driver.“